8 Places in Jinan You Have to Visit

By adminOctober 30, 2019Uncategorized
No Comments

The best way to start your English teaching career is to become a TESOL teacher with ATA TESOL College.
Make sure to check out our courses page to find out about TESOL.
Or email us at marie@ataonline.edu.au to find out more today!
Want to learn how to choose the best TESOL Course? Contact us today. 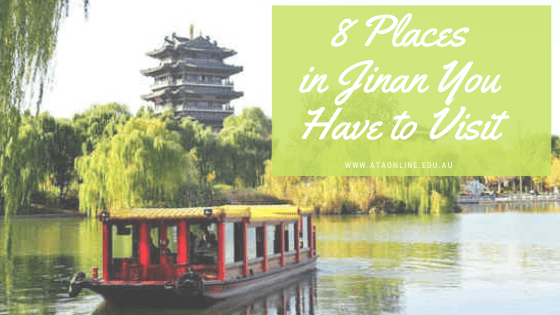 Daming Lake is one of the three famous places in Jinan, the other two are Baotu Spring and Thousand Buddha Mountain. It is a rare natural lake in the bustling city and is located in the northeast of the city centre. It is an important scenic spot in Quancheng since the Tang dynasty (618-907AD). The lake used to be a popular spot where the literary notables would trade float liquor cups down the stream for poetic remarks. The scenery of Daming Lake is beautiful and there are also temples, bridges, and little islands to discover. You can also take boat rides to enjoy the beauty of Daming Lake and the light show at night.

After drilling through an inconspicuous intersection near Quancheng Road, you will find that behind this bustling Quancheng Road, there is also a well-preserved and rich old city atmosphere street, Furong Street. Furong Street is a historical business street located in the central area of the old city of Jinan. Although Furong Street is now just a narrow alley, there are numerous street food, all kinds of foreign snacks, and the buzz of tourists all over the street which has made this small street be bustling again!

Baotu Spring Park is located in the downtown area of Jinan, with Thousand Buddha Mountain in the south, Daming Lake in the north, and Quancheng Square in the east. The most famous of the park is the Baotu Spring, which is known as the ‘Number One Spring under the Heaven’. The Baotu Spring is the most renowned spring among the 72 named artesian springs in Jinan and has a history of more than 2,000 years. There are various cultural events will be held in the park and the visitors can also take the boats to visit the Baotu Spring Scenic Area.

Quancheng Square is located in the bustling downtown area, adjacent to many attractions in Jinan, west to Baotu Spring, south to Thousand Buddha Mountain, east to Liberation Pavilion, and north to Jinan Moat. The location can be said to be quite good. There are also a large number of shopping malls, restaurants, and hotels around Quancheng Square where you can travel, go shopping and taste delicious food at the same time. The square also has nearly 100,000 square meters of green space, providing the public with an evergreen urban garden.

The Thousand Buddha Mountain is a hill located in the south of Jinan City and it is famous for its many ancient Buddha statues. Here, you can enter the cave which has nearly 30,000 Buddha statues to explore the mystery of ancient arts, go to the Xingguochan Temple to pray for blessings, or climb to the top of the mountain overlooking the panoramic view of Jinan City. Every year on the third day of the third lunar month and the ninth of September, there will be a grand temple festival in the Thousand Buddha Mountain where the tourists can see various performances, taste a variety of snacks, and can also pray for blessings.

The Sacred Heart Cathedral, commonly called the Hongjialou Cathedral, is located in the eastern district of Jinan. It has a history of 100 years and it is the largest Catholic church in North China and the landmark of Jinan. Its nearly 60-meter towering upright double towers depict the classics of the Middle Ages in a traditional Gothic architecture style. Although the Sacred Heart Cathedral is a traditional Western-style building, the essence of Chinese culture can be seen through the traditional craftsmanship of the carvings.

The Shandong Museum is the primary museum in Jinan and the largest museum in China. It is located in the eastern part of Jinan City and near the Jinan’s high-speed train station that the tourists can easily go ahead. In the museum, you can see a large number of ancient artefacts, bronzes, ancient books and calligraphy, oracle bones, and the Han Dynasty stone paintings. After visiting the Shandong Museum, you can have a systematic understanding of the cultural history of Shandong Province and the knowledge of Chinese cultures. Be sure to plan at least 4 hours for the visit, if you are interested in ancient Chinese culture!