8 Foods You Have to Try in Jinan, China 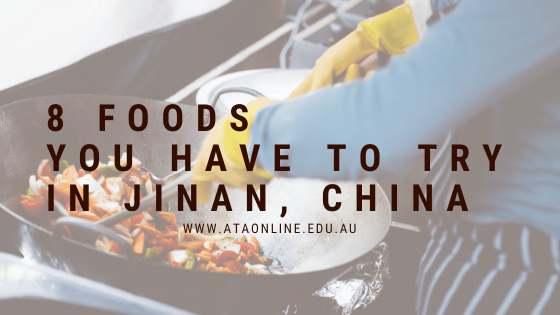 Oil Spin is a traditional snack in Jinan which was first made during the Qing Dynasty. The outer of oil spin is crispy and the inner is soft and tender. Because of its shape resembling a spiral and the surface is oily and golden, hence the name oil spin. Oil spin is a kind of the onion cake and many Jinan people like to have a bowl of chicken wonton soup when they eat the oil spin.

A very strange traditional snack which has been a hundred years since the Ming Dynasty. Although its name is sweet foam, it is actually a kind of salty porridge cooked from millet powder. The locals also call it ‘Five Sweet Foam’. Among the many snacks in Jinan, sweet foam is the most distinctive and cheap snack. Do not miss to try it!

Grass bag buns are traditional food in Jinan. The buns are rich in soup and dedicate in taste. The second generation of the descendants led the chefs to study the innovation and development of the Lu cuisine and the buns have been added to eight series from only one pork soup bun in the past. When ordering the buns, the staff will wrap them with green lotus leaves so that the hot buns have a special fragrance.

Sweet and Sour Carp, a traditional Chinese dish, is one of the representative dishes of the Lu cuisine. The carp produced in the Yellow River is not only fatty and delicious but also has glistening golden scales and a red trail. It is tender and delicious with a crispy crust and a bit sweet and sour. Besides, eating carp is good for lowering blood viscosity and cholesterol as well as increasing immunity. Therefore, do not forget to order the sweet and sour carp when you visit Jinan.

The Chinese name of this dish is ‘Jiu Zhuan Da Chang’ based on its precise cooking procedures. The main ingredient is pig intestines which are boiled, fried, then seasoned with more than 10 ingredients including black pepper, cinnamon and so on. As one of the most famous dishes in Jinan, this dish is popular for its special seasonings and rich taste which you can taste sour, sweet, spicy, salty all in the first bite.

The stir-fried pig’s kidney is a traditional Chinese cuisine in Jinan. It is a home-cooked dish based on the pig’s kidney. This dish is made by stir-frying and its characteristics are tender, mellow taste, smooth, and not greasy, more importantly, it has a high nutritional value. The side dishes and the condiments vary from place to place, and the taste is also different, some are sweet and sour others are salty and spicy.

As its name implies this steamed bun has a variety of stuffing. The stuffing is made by crushed peanut, sesame, walnut, almond and melon seeds which have been fried first and then mix with red jujube, osmanthus-scented jam and sugar to make it more flavoursome and sweet. The five-stuffing steamed bun is one of the special snacks of Jinan which is full of protein and has high nutritional value.

The best way to start your English teaching career is to become a TESOL teacher with ATA TESOL College.
Make sure to check out our courses page to find out about TESOL.
Or email us at marie@ataonline.edu.au to find out more today!
Want to learn how to choose the best TESOL Course? Email us today.